It’s Not Failure We’re Afraid Of

Everyone talks about fear of failure.  But it’s not failure we’re afraid of.

Failure, by itself, doesn’t feel bad. Screwing up is just a neutral experience — in a social vacuum.  What feels bad is when people find out we screwed up.

Because what we’re really afraid of is rejection.

A recent survey of 1,200 older Americans showed that their most common regret was that they’d wasted  too much time worrying.  So what if we could train ourselves not to worry — about rejection?

Imagine yourself as one of these “older Americans.”  Put yourself at the end of your life.  Look back at how you approached your fears and your ambitions.  Will you regret the ways in which you held yourself back due to fear of rejection?  What might have been possible for you if you hadn’t?

In our podcast release this week, we did a feature on the fascinating saga of Jia Jiang, a Chinese American who wanted to be Bill Gates and realized that what stood in his way was his fear of rejection.  So he went on a “rejection therapy” odyssey. Every day for 100 days, he made a preposterous demand of a stranger. 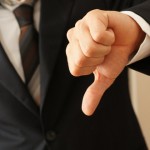 He went to a burger joint and asked for a burger refill, instead of a drink refill.

He went to PetSmart and asked for a hair trim.

He asked a stranger to let him join his Super Bowl party.

And he got rejected. Over and over again.

I’m not suggesting you submit yourself to this kind of rejection therapy. Really, if you’re courageous enough to do what Jia Jiang did, maybe your fear of rejection isn’t as limiting as you thought it was.

Here’s what I am suggesting:  every day for the next two weeks, ask yourself, with pen in hand, “What would I do if I didn’t worry about being rejected?  What life purpose, what creativity am I holding back, am I afraid to put into the world, because of what I fear others will think, and what I fear will happen to me as a result?”

Do this exercise consistently and you might arrive at your deathbed with fewer regrets – with a hindsight view of a life well-lived.