Review: “Does Someone Have To Go?”

Watching reality TV is, to put it mildly, not my thing.  At best, it’s voyeurism.  At worst, it encourages us to emulate the worst in human behavior. The very label “reality show” is absurd on its face, a true oxymoron.

But I had to check out the newest workplace reality show, “Does Someone Have To Go.”  Hell, I’m co-host of The Boss Show.  It’s background research.

In the first half hour, my mind went to typical assessments of reality TV:  How do they find this many dysfunctional people in one workplace?  How can these people have so freaking little self-awareness of what they’re doing to their coworkers, let alone to themselves?  How can people spend years in the same office and not know what their coworkers think of them?

The show was a mid-season Fox replacement that aired three two-part episodes this spring.  The premise:  employees become, collectively, “the boss” for two days.  A small-company CEO hands the reins of firing, demotion, pay cuts and probation to all the employees in a democratic process. 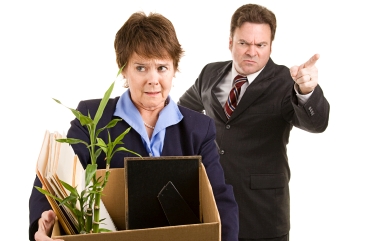 After hearing what everyone thinks of everyone else, the employees cast secret ballots for the “Bottom 3.”  Then those three plead their case at a meeting of their coworkers, who collectively decide what’s to be done with them.  In between, the camera records some of the worst of human workplace behavior:   gossip, denial, defensive rationalizations, unhealthy conflict.

But what I didn’t expect is that the camera also records some of the best of human workplace behavior:  true caring– even love–for coworkers, passionate dedication to job and company, and a genuine desire to blast through denial and defensiveness to personal growth, despite the pain.

This last piece is the most impressive source of redeeming value for “Does Someone Have To Go?”  When faced with the undeniable, uncomfortable truth of what all my coworkers think of me, it’s pretty hard for me to remain in denial.  When my options are either to get canned or to grow, many choose growth – including  the painful self-awareness that growth requires.

On The Boss Show, Jim and I constantly harp on this essential workplace truth:  your success depends on your understanding of how you’re perceived.  That understanding needs to be refreshed day by day in open and honest interactions with your coworkers.

That cultural norm of consistent feedback clearly doesn’t exist in the companies depicted in “Does Someone Have to Go?”, and the CEOs deserve part of the blame.  Had they fostered that healthy culture, they would have avoided the dysfunctions that delivered their companies into the hands of the show’s producers.

Let that be a lesson to you.  If consistent, honest feedback isn’t what your team does, work toward it.  It ought to be a reflection of the caring for your colleagues and the dedication to your job that every worker ought to experience every day.  Otherwise, you might end up in the Bottom 3 on a workplace reality show.

In the July 9th Boss Show episode, Jim & Steve discuss the TV show, “Does Someone Have To Go?”  They also explore what to do when an employee gets fired.